11 June 2011 by Joe Glasman in Uncategorised 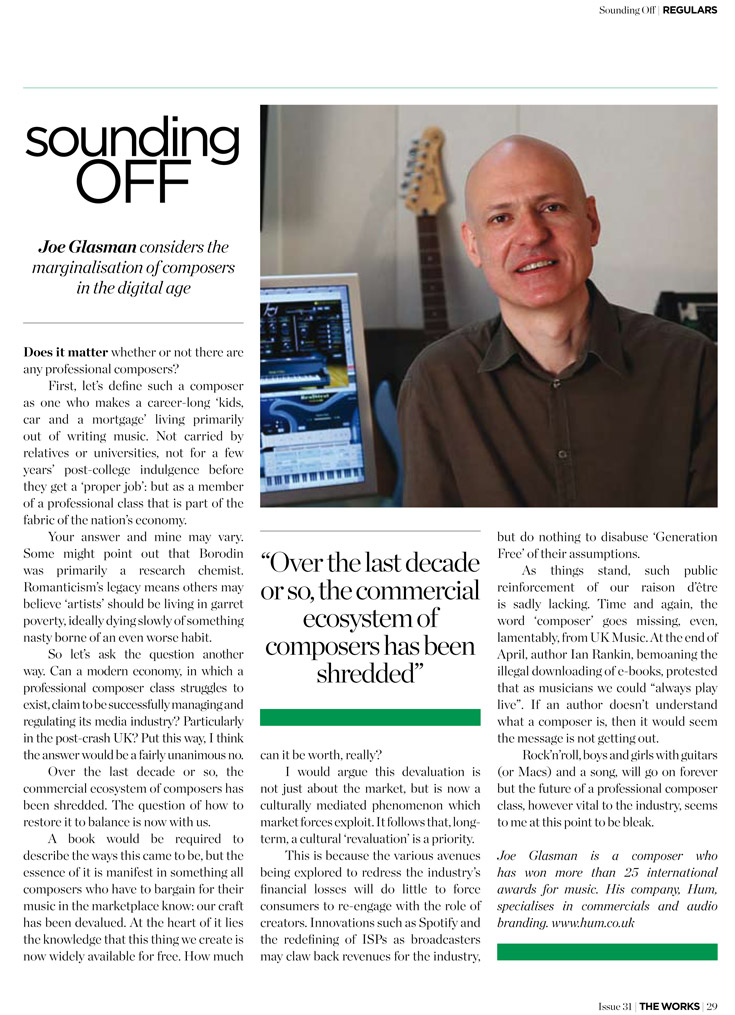 Does it matter whether or not there are any professional composers?

First, let’s define such a composer as one who makes a career-long ‘kids, car and a mortgage’ living primarily out of writing music. Not carried by relatives or universities, not for a few years’ post-college indulgence before they get a ‘proper job’: but as a member of a professional class that is part of the fabric of the nation’s economy.

Your answer and mine may vary. Some might point out that Borodin was primarily a research chemist. Romanticism’s legacy means others may believe ‘artists’ should be living in garret poverty, ideally dying slowly of something nasty borne of an even worse habit.

So let’s ask the question another way. Can a modern economy, in which a professional composer class struggles to exist, claim to be successfully managing and regulating its media industry? Particularly in the post-crash UK? Put this way, I think the answer would be a fairly unanimous no.

Over the last decade or so, the commercial ecosystem of composers has been shredded. The question of how to restore it to balance is now with us.

A book would be required to describe the ways this came to be, but the essence of it is manifest in something all composers who have to bargain for their music in the marketplace know: our craft has been devalued. At the heart of it lies the knowledge that this thing we create is now widely available for free. How much can it be worth, really?

I would argue this devaluation is not just about the market, but is now a culturally mediated phenomenon which market forces exploit. It follows that, long-term, a cultural ‘revaluation’ is a priority.

This is because the various avenues being explored to redress the industry’s financial losses will do little to force consumers to re-engage with the role of creators. Innovations such as Spotify and the redefining of ISPs as broadcasters may claw back revenues for the industry, but do nothing to disabuse ‘Generation Free’ of their assumptions.

As things stand, such public reinforcement of our raison d’être is sadly lacking. Time and again, the word ‘composer’ goes missing, even, lamentably, from UK Music. At the end of April, author Ian Rankin, bemoaning the illegal downloading of e-books, protested that as musicians we could “always play live”. If an author doesn’t understand what a composer is, then it would seem the message is not getting out.

Rock’n’roll, boys and girls with guitars (or Macs) and a song, will go on forever but the future of a professional composer class, however vital to the industry, seems to me at this point to be bleak.

Joe Glasman is a composer who has won more than 25 international awards for music. His company, Hum, specialises in commercials and audio branding. www.hum.co.uk